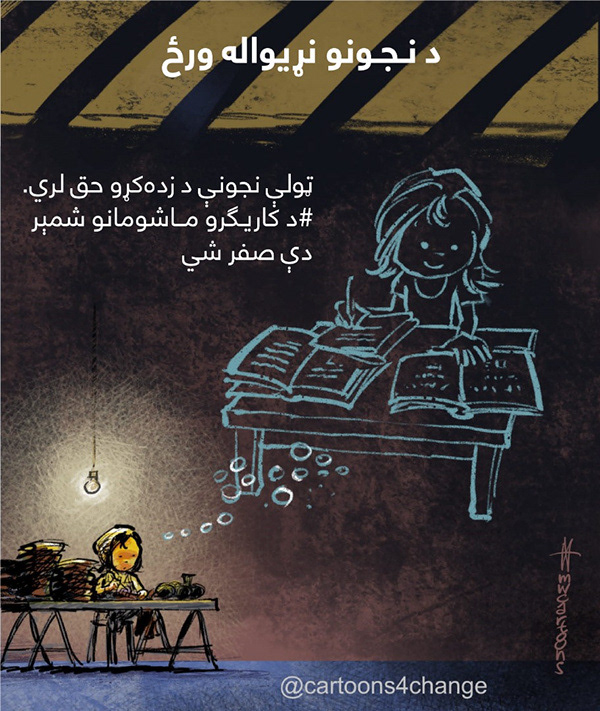 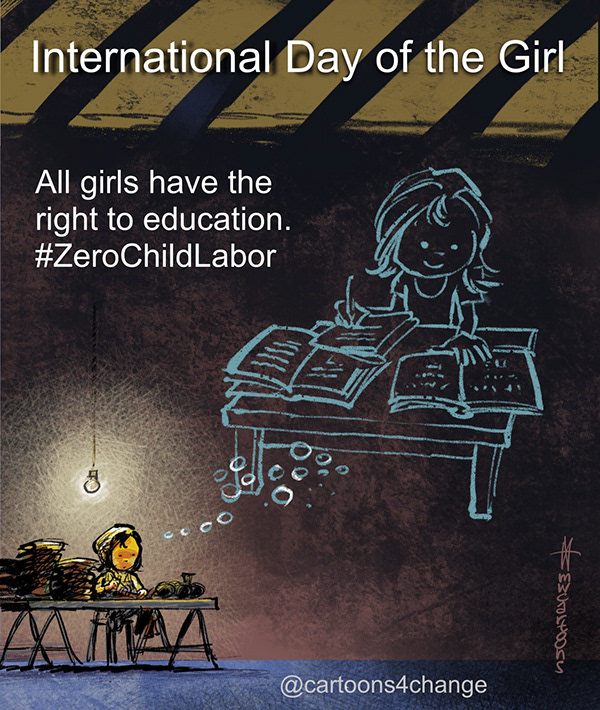 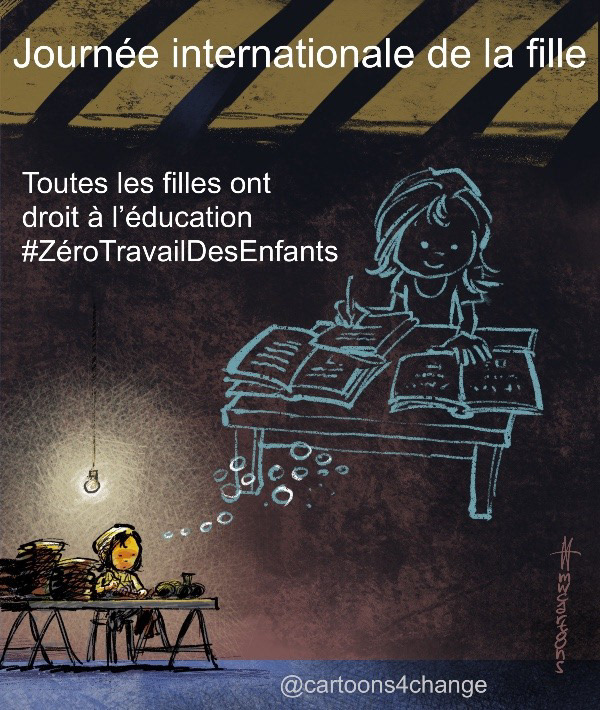 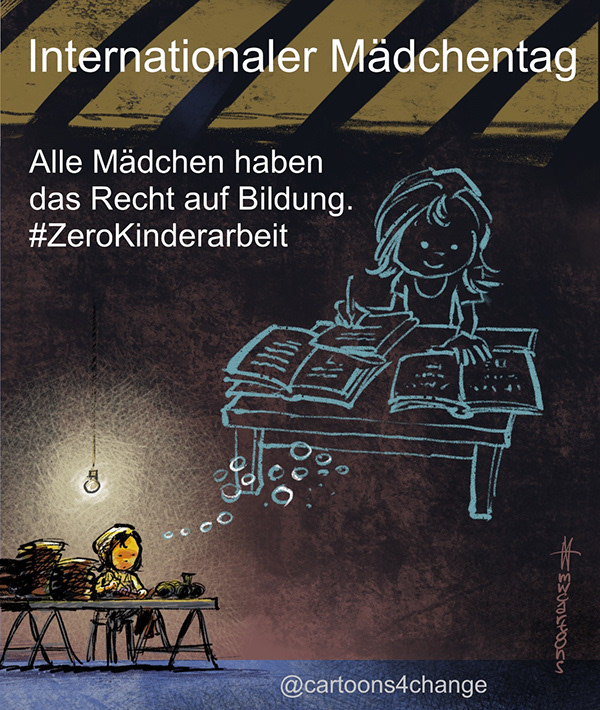 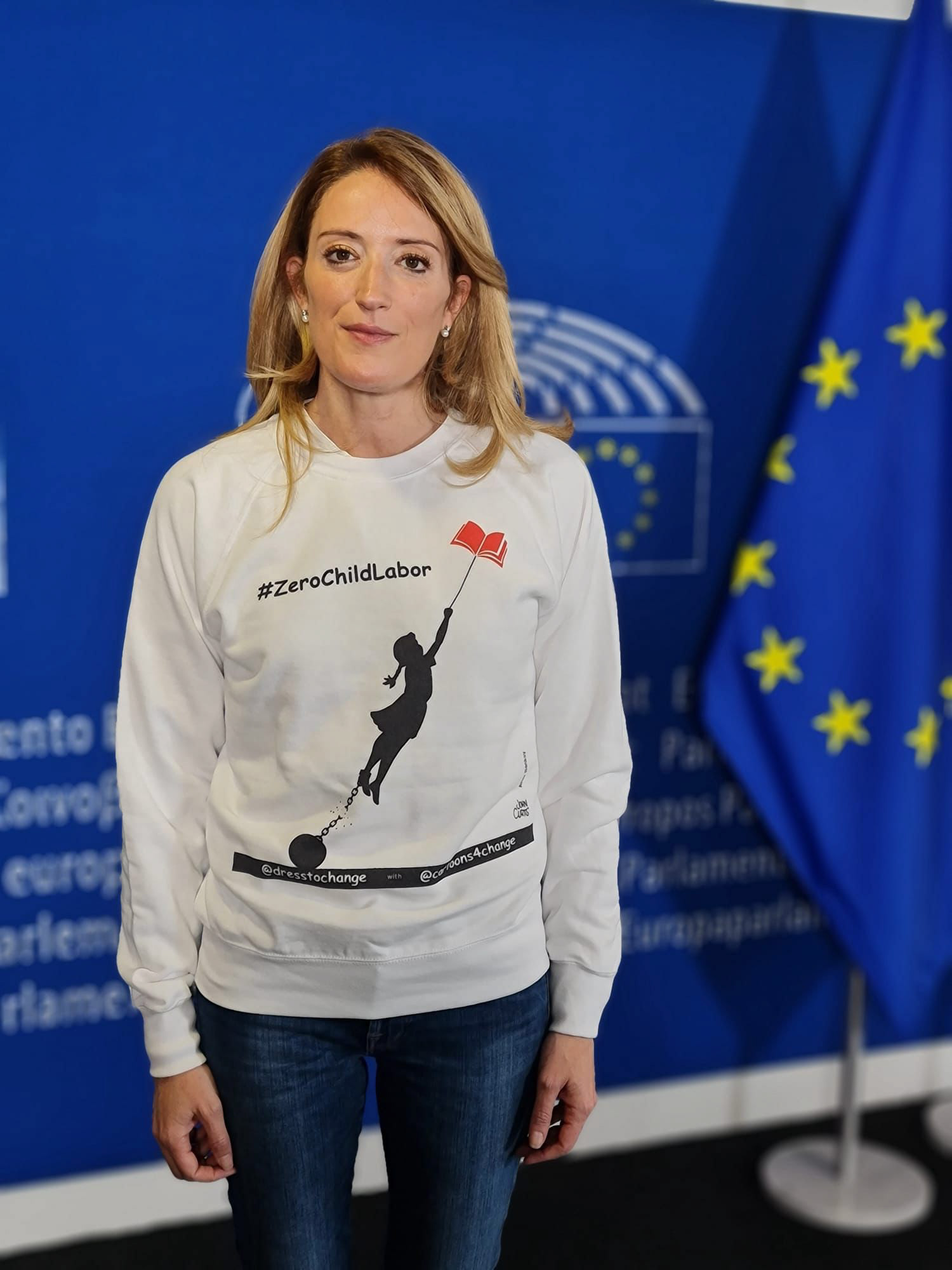 The President of the European Parliament, MEP Roberta Metsola, joined #DressToChange the World with Cartoons for Change to defend the rights of all girls and boys to education and to demand governments and corporations #ZeroChildLabor. 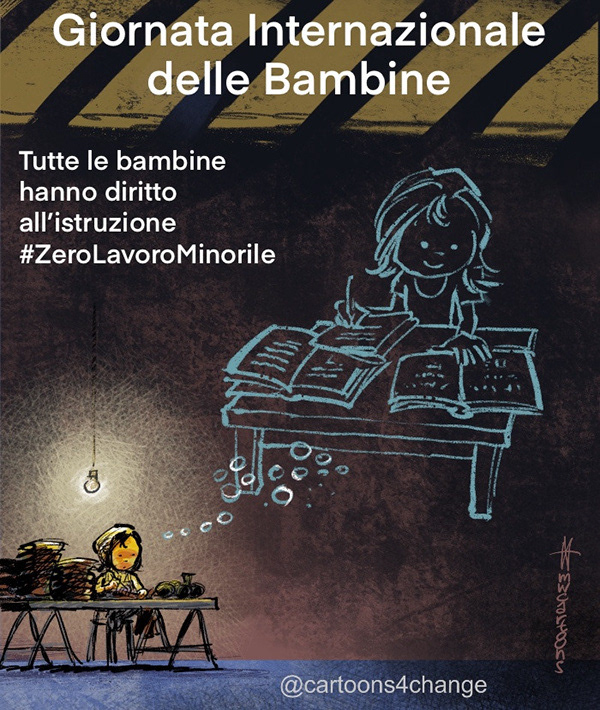 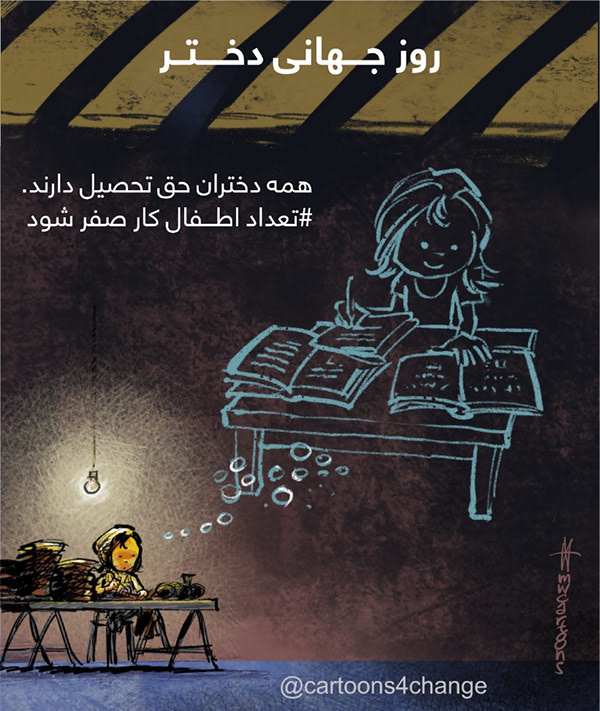 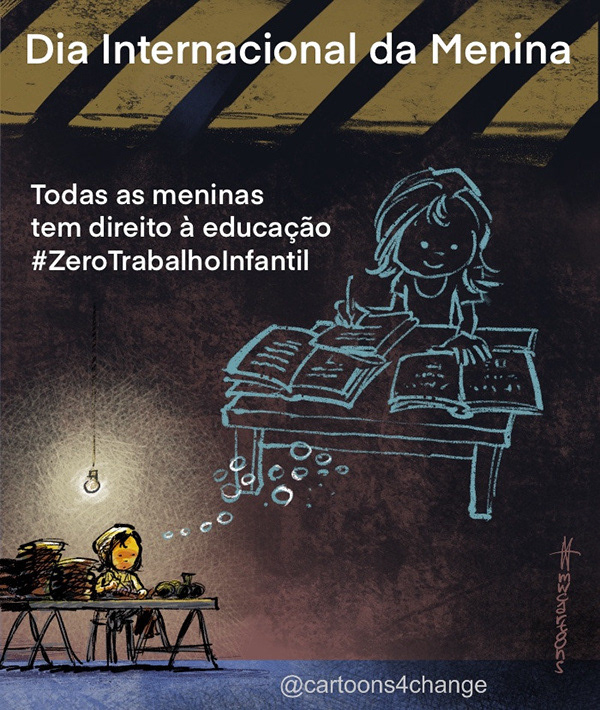 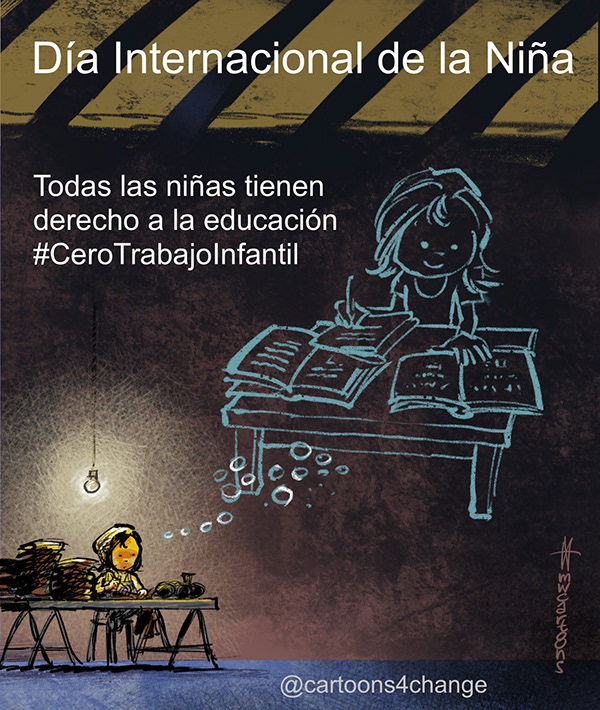 Working Girls’ Dream by Maarten Wolterink for Cartoons for Change
CARTOONS FOR CHANGE : Cartoonists and Illustrators to protest against Child Labor
On occasion of the International Day of the Girl, October 11th, Cartoons for Change launched it’s global campaign with cartoons #AllGirlsHaveTheRightToEducation #ZeroChildLabor. This initiative will last one year and is being developed with the participation of cartoonists and illustrators from all continents. This Cartoons for Change campaign advocates to defend the right to education of all girls in the world and demands governments and corporations #ZeroChildLabor.
According to Fernando Morales-de la Cruz, Founder and Editor in Chief of Cartoons for Change and a human rights activist born in Guatemala, the total number of children that work today is close to 300 million. This has to change. Child labor is a consequence of poverty and in many cases is caused by exploitative business and trade models, but it is also the cause of “sustainable” misery. 2021 was the International Year for the Elimination of Child Labor and child labor increased. According to Morales-de la Cruz, this is not only a consequence of the pandemic. None of the developed nations and none of the top 1,000 corporations in the world have a real plan to eliminate child labor in the supply chains. They did not even have a plan on the international year for its elimination. Child labor is seen by too many corporations as a way to optimize costs and increase profits. Sadly, girls and women are also most of the victims of these cruel business models.
74 years after the Universal Declaration of Human Rights, 33 years after the ratification of the Convention on the Rights of the Child and 7 years after the United Nations launched the Sustainable Development Goals the reality of hundreds of millions of children and specially of girls is inhumane. It is fair to say that the SDGs are failing the poorest and especially children and women.
Cartoons for Change will offer the public the possibility to participate in this campaign to defend girls’ rights with the action #WearIt. People of all ages in all countries of the world will be challenged to #DresstoChange the world. The complete campaign is being launched initially with Cartoons for Change in 12 languages and will be in more than 50 languages in the coming months, to reach people on all continents via traditional and social media. You can follow @cartoons4change on Twitter, and Instagram and Facebook @cartoons4changenow
+++   +++   +++
#BerlinWall2021
Cartoonists Protest
Against Child Labor
Cartoons for Change invites cartoonists, artists and illustrators to protest against child labor on
June 12th / the #WorldDayAgainstChildLabor
This action is part of our global campaigns
#ZeroChildLabor & #365DaysAgainstChildLabor.
2021 is the International Year for the Elimination of Child Labor and child labor has increased.
Cartoons for Change asks cartoonists to denounce the horrors of child labor in the supply chains of corporations & developed nations.
They don't have plans to eliminate child labor - its profitable!
"It's absolutely unacceptable, cruel and illegal that 72 years after the Universal Declaration of Human Rights and 31 years after the Convention on Rights of the Child nearly three hundred million children work. This must change and it must change now!"
Fernando Morales-de la Cruz, Founder of CARTOONS FOR CHANGE
The lyrics of Working Girls, Working Boys were written by Maïte Barragan and Fernando Morales-de la Cruz thinking of the millions of children that work to produce our coffee, cocoa, etc. due to cruel, unacceptable and illegal business models. The song is interpreted by the French singer Maïte Barragan. Instrumental music, based on "jingle bells": Sandy Ratovondrahety.  Record, Mix and Mastering : Baya N'Dongui - Bayafoye Productions 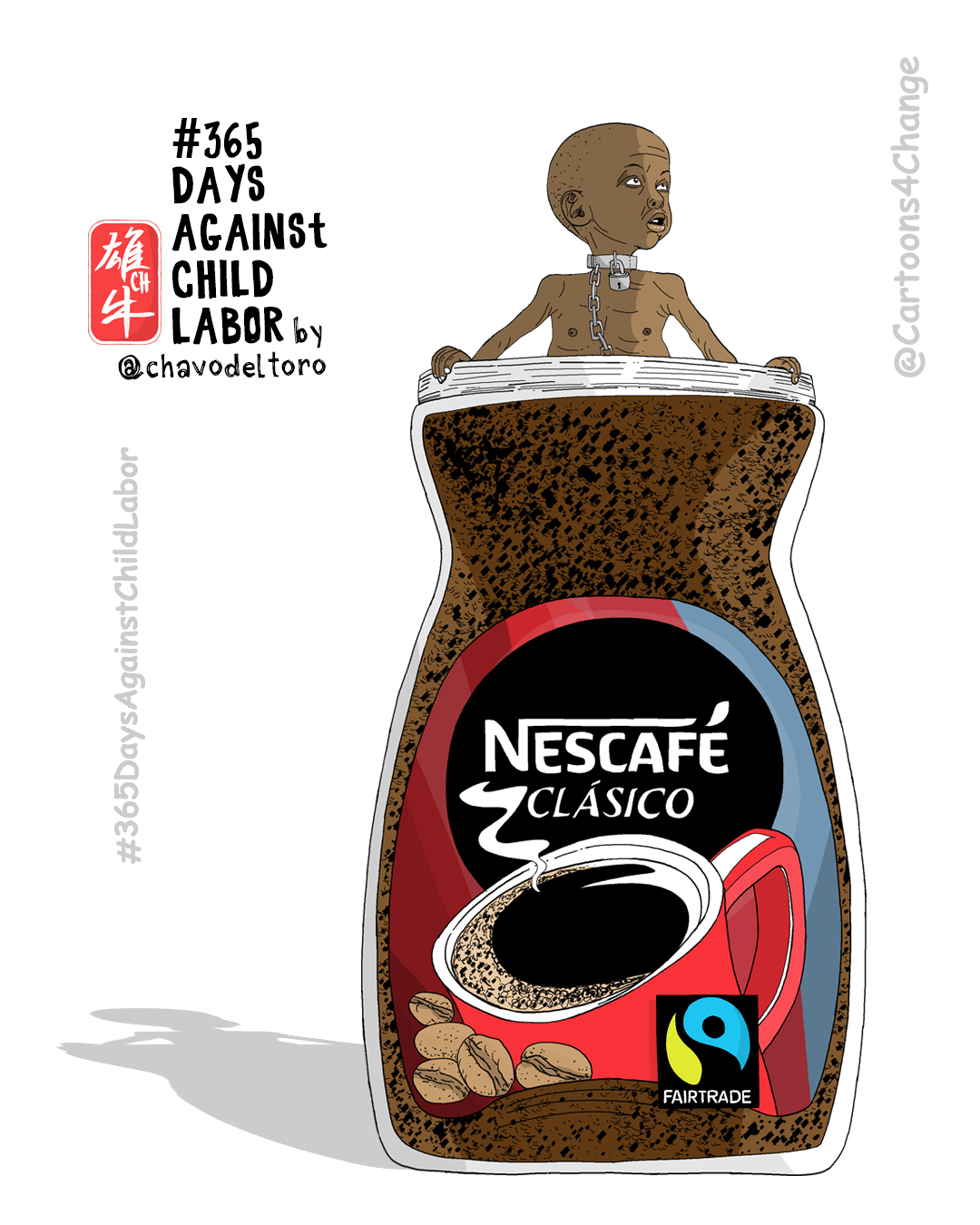 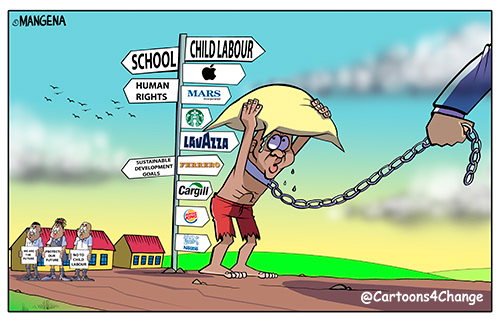 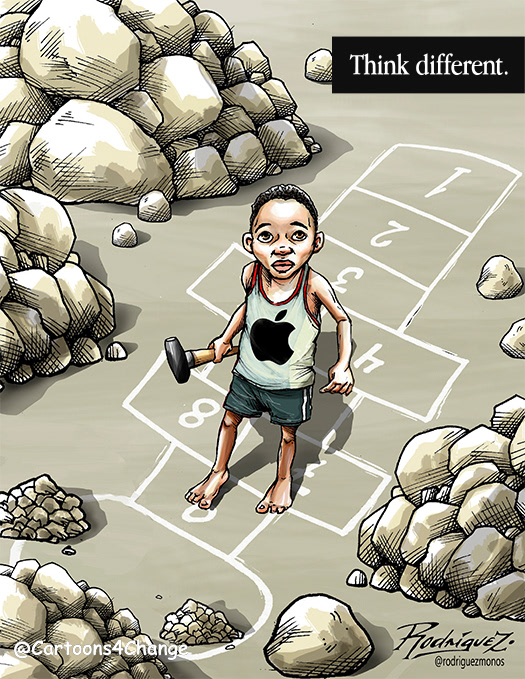